This is the third part in my IRONMAN series, read about the swim here and the bike here.

At this point I’m almost seven and a half hours into the race. This number, while large (it was the longest I’d ever raced up to that point), only represented just over half my total race time that day.

With that in mind, I knew my running pace would be slow. However, the excitement of seeing my family again and hitting the crowds on foot gave me a short burst of energy, netting me an 8:30ish pace for the first (mostly downhill) mile. At this point I started pacing a Illinois grad decked out in Illini gear. We stated with each other for the first few miles, chatting about anything and everything to keep our minds off our whining legs and draining energy. Eventually he would pull ahead, only to show up a few miles later and get passed. This happened several times throughout the run.

Thankfully, most of the first part of the run is either downhill or flat, giving my legs a bit of time to acclimate to the new motion before I had to drain them on a climb.

One of the cooler parts of the run was our lap of the Badger Stadium. We ran down a little ramp and did a lap on the beautiful artificial turf field. The only complaint I had is that the stadium was not full of 75,000 cheering fans. While it was neat to see the stadium from that angle, it would have been even better to imagine I was actually a world-class athlete that pulled a crowd. Maybe if I did a third lap of the course I could have hallucinated the crowd.

After the stadium stop, the hills once again started. There was first a long, slight climb, followed by an equal downhill. This wasn’t all too bad, but it definitely sapped my strength some. Another few miles later came the real hill. It was a 100′ gain in about a mile. I think I ran most of this his the first lap and walked it with another 100 people on the second lap. This one was mean, eating up several miles’ worth of energy. My Illini runner partner and I were dreading the return trip. We were happily relieved when we found out that we didn’t have the tackle that hill again for another 13.1 miles.

This hill was not a complete waste, as it gave us one of the best views of the day, looking out over Lake Mendota. It was a beautiful sight with all the sailboats leisurely moving with the wind through the water (as opposed to our grueling fight with gravity).

My nutrition plan catches up with me.

You can easily fake the swim in an Ironman; you can fake the bike as well. You can not fake the run. If you didn’t pay attention to your nutritional needs on the bike, you’re in trouble in the run.

Thankfully, I did pay attention to my liquid needs. On the other hand, I paid a bit too much attention and had to pit 4-5 times during the run to pee. While this is normally not a problem for a guy, wearing a one-piece tri kit made this job so much more difficult. By the third pit, I contemplated tearing a hole in my kit to ease access, but I didn’t think the 75,000 cheering fans needed to see that side of me.

Most annoyingly, all the GUs and bouncing caught up with my stomach. It convinced my on several occasions to pit as well. I’m not exactly sure why my stomach was so upset, as this had not occurred in training. My only guess is that the extended length put my body through way more than I had trained for and the result was all these pit stops. Perhaps I needed to eat more whole foods to give my intestines something to process. I had many handfuls of pretzels, lots of oranges and some grapes, and four uncrustables, but maybe I needed more.

In reality, the 15-30 minutes I spent relieving myself did not make a big difference, as I still finished well within the 17-hour limit. It was clear to me during the race that I was over-drinking, but the fear of a bonk like in the Chicago Marathon last year saw me taking two Gatorades per aid station despite my frequent pit stops. I’m definitely going to try and figure out why the stomach discomfort happened and see if I can fix it for my next long race.

Lap one was not too bad. I don’t believe I walked except for maybe the steep hill and through aid stations. I averaged something like a 10:30/mile pace. Lap two was another story.

Things started off well, especially since I knew I’d get to see my family again, but their energy didn’t last as long as I had hoped. In the end I would have averaged about 14:30/mile or worse for the second half marathon. I had clearly dipped into, and depleted my glycogen stores. Whatever I was running on, it didn’t give me much juice. Once I hit the big hill the second time I started fighting to stay in the running stride.

I lost this fight a lot during the shoreline run portion. My feet and knees were screaming at me so much that I just wanted to give in.

After the final u-turn it occurred to me that everything I did hurt equally bad and did my best to run the remaining four miles. I’m using “run” liberally here, as the aid worker that was singling “Everyday I’m Shufflin'” as I shuffled by was spot on. While I was breaking stride, that was the only thing running-related about the movement I was doing. I also loved the comment another aid worker made as I shuffled by: “These people are asleep.” She couldn’t have been more correct. I was indeed a zombie, running while only barely conscious.

In hindsight, I actually negative split the final six miles.

The crowds were instrumental in helping me finish. Rounding the right turn onto State Street and seeing the sides lined with energy was amazing. I was able to maintain, even drop pace a bit on this final uphill climb.

I knew the finish was finally within reach and I was finding energy I didn’t know I had.

It didn’t really hit me until I turned onto main street. Then the smile hit. The relief occurred. All pain went away.

I find it a bit funny that I accelerated so much through the finish shoot. I really should have slowed down and enjoyed the experience, instead I ran it at a 6:30 pace. Not too bad after 140 miles of work, but still. I only get that first finish once and there was no reason to rush it.

The adrenaline lasted about two minutes, enough time for me to get my photo take and be routed to the finisher corral.

Once I sat down my body temperature went from comfortable to freezing. I started to shiver uncontrollably. A helpful worker got me an extra foil blanket, and some pizza, but that was not enough. Even seeing my boys for the first time in 24 hours wasn’t enough to shake the shivers. Thankfully my gracious wife gave me the shorts and t-shirt she brought for me and then went and grabbed my morning clothes. I ended up wearing my finisher shirt, two more t-shirts and a long sleeve sweater on top, in addition to shorts and flannel pants on bottom, all under two foil blankets. Even that didn’t do that job at first. I didn’t really warm up and stop shivering until I went into Menona Terrace’s heated foyer.

The run was slow, but I got it done. My pace was erratic, but other than better nutrition control, I don’t know what I could have done, I was just spent.  Obviously I could have trained more, but there’s nothing I could have done on race day to change that.

The run, like always, was my worst discipline for the day. After averaging 80th or so in my age group I dropped to 153rd for the entire race. I was the 835th guy to cross the finish line and the 1015th person total.

I really can’t complain about my time of 13:07:42. I had a goal to finish before my kids’ bed time, and I did that by almost a half hour. My secondary goal was to finish before sundown, but I didn’t check when sundown was, so that goal was a bit too aggressive. 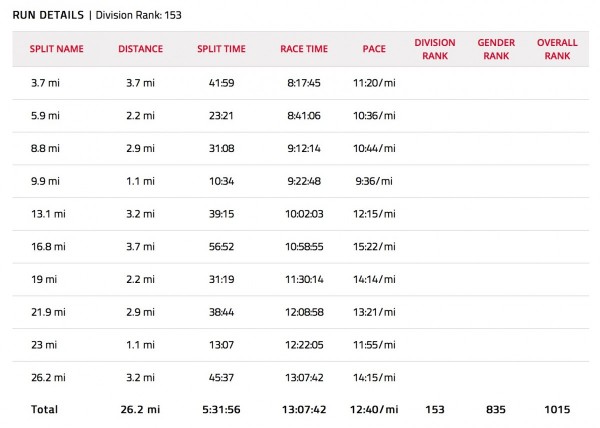 Should I compete in one of these again I will definitely focus more on the run. The bike was important, but I think rather than a 1:1 run:bike ratio, a 3:2 ratio would have provided me a better base to finish a 4:XX marathon.

I have to finish this post with a huge thanks to my wife. She had to deal with my incessant training (nearly 300 hours in total) for a year and drag two kids around a giant race course for 13 hours. Without her support I could definitely not have completed this challenge. Thank you Jennifer. I love you.