This is a continuation of my 2015 IRONMAN Wisconsin race report. Part one, Pre-Race, Swim & T1 can be found here.

Transition is held on top of Monona Terrace, a convention center designed by one of the best architects ever, Frank Lloyd Wright. The back half of the terrace is a parking ramp, which is accessed via a corkscrew ramp. We ran up the ramp from the swim into T1 and now it was time to ride down the corkscrew and out of T1. 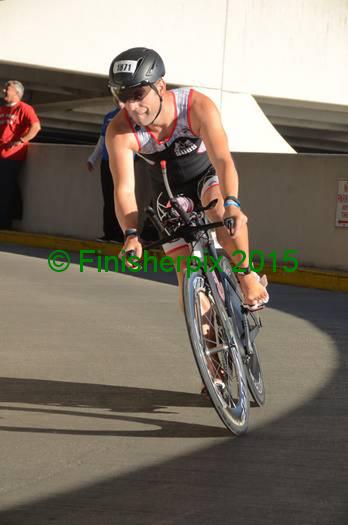 This was a bit worry some for me, as I chose to leave my shoes clipped into the bike and put them on during the ride. Experience has shown me that running in hard, plastic-bottomed bike shoes is just awkward, if not dangerous. It’s just easier to run barefoot to the mount line and get your shoes on during the first hundred yards of the ride. Usually this is done in a flat area, but I had to go down a tight corkscrew with my fee ON TOP of my shoes. Thankfully, this turned out to be a non-issue and the mount went off without a hitch.

Prior to this race my longest ride had been 103 miles. I’d swum way more then 2.4 miles in a session before this. I’ve already completed a couple marathons. But I’d never ridden 112 miles, never mind without taking a break. Needless to say, I was a bit apprehensive.

The ride starts easy enough. We’re routed through some twists and turns for a mile or so to reach the open road.

And then the hills start.

The first climb takes us up about 300 vertical feet over 13.5 miles. It’s not a horrible climb by any means, but it’s a taste of things to come. We quickly lose about half this gain in less than a mile, and then start the rolling hills that remind me of home.

At mile 27 we meet the first of the “three bitches,” as I heard them called more than once (which we meet again in lap two). This hill makes you pedal up 400′ vertically in about two miles, followed by a quick 200′ drop in two miles. You then gain that 200′ back in two miles once more.

Bitch number two starts after a 450′, two mile drop. As is the theme of the course, what spins down must pedal up, and we gain that 450′ back in about two miles as well.

The final big climb of this lap consists of a 200′ descent and ascent in the span of two miles.

Then there’s just the straight and fast rolls. At one point you shoot through a corn field, going down an extremely steep hill at 40+mph. I thought I was fast at 41mph, but a local I spoke with hit 45mph on it that day. I have to say, that’s crazy fast when in the aero position on a bike with deep front wheels and a slight cross wind. 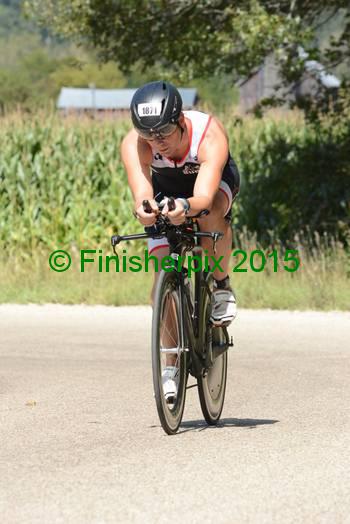 While the course is well know for its hills, they’re not your only foe (or stimulation to keep you awake). The seemingly endless turns and curves (well over 100) range from challenging to scary to just annoying.

For example, one of the annoying turns happens mid-climb on Sugar River Rd, IIRC. It wasn’t a horribly difficult climb, but about 75% of the way up you are forced to take a 90° right turn at a seemingly 30° slope. With my 39-28 gearing, that turn was hard the first time around exceedingly difficult to do on the second lap. It had me down to 8.Xmph.

Perhaps the scariest part of the race is one of the three bitches’ downhill sections. Garfoot Road takes you from the top of Wisconsin’s rolling hills into a deep ravine via a fast and tight right-left-right-left esses boardered by full grown forest. I guess some crazy people can take these with little or no braking. I’m not crazy. I don’t know if it was my bike, or the bike in front of me, but the smell of hot brake pads was definitely in the air. I was genuinely scared my first time through there.

Thankfully I saw no crashes in this section, and only one rider that bailed into the “runaway rider driveway.”

IRONMAN Wisconsin has a secret weapon to fight these relentless hills. It comes in the form of thousands of equally crazy, screaming fans. These fans ranged from families of racers that were happy to spread their support to other riders, to extremely energetic triathlon teams, to the insane guys dressed in drag and other skimpy outfits screaming support as you unavoidably triple your goal watt output. One set of note was a few ladies holding giant Fs. They cheered us on, telling us to “get the F up the hill!” Or the guy in the Genie costume, with the sign “follow me, I know a shortcut.” After a hours of biking and running, and spotting him for the sixth time, I started to wonder if Robbin Williams had come back to life and was indeed flying around.

I only got to see my family once on the bike course. They staked out a spot in Verona and saw me as I was busy resetting after an aid station. It was definitely great to see them for about two whole seconds.

Without these spectators, I don’t think the day would have gone quite so well. 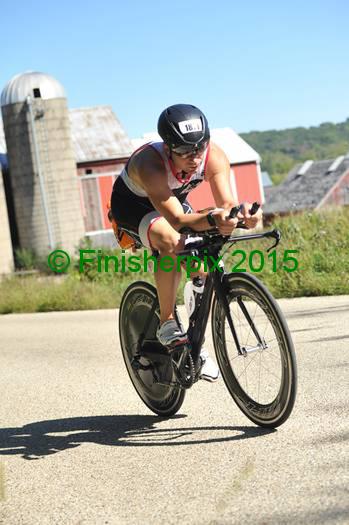 Prior to this race I had never experienced an aid station on a bike. I’ve learned to slow down on the run and take my time so I don’t choke on my drink, but slowing down’s not really an option on two wheels.

I quickly figured out a great way to get a bottle passed to me quickly and safely. I would simply point at the volunteer that had what I needed and they would happily “speed up” their handoff to match my pace. It was great. Didn’t miss a single handoff.

I even hit a few of the “goals” with my used bottles.

After two laps of hills, I was relieved to hit the left and start my way back to transition.

Surprisingly, I was feeling pretty good at this point. The back aches that had plagued me in training were non-existent, my butt only marginally hurt.

After that left I know there was a hill or two left, but I thought the worst was past. While I was mostly right, I was definitely wrong. There was one big climb left.

At this point I think I was passed by the only person with bigger hill legs than me. I will say, he was on a crossover looking deal, with way better hill gearing than me, but still, he did pass me on a climb, which was a first for the day. I will also note that the homeowner on this hill had a beautiful lawn. All four acres of it. Perfectly manicured and pest free.

After this hill, it was essentially all down hill from there. I spun on into town, had no issues getting out of my shoes and climbed the helix to T2.

Before the third bitch a guy passed me. Then slowed down. Rather than pass him directly before a hill I just back off a bit. Of course, this coincided with an official sneaking up behind me. And I didn’t back off enough. And the happiest official ever flagged me for drafting. I mean, he sounded like it was my birthday when he gave me that penalty.

So, as I came into T2 I got to have a nice five minute break and chat it up with a guy. I really was not horribly bothered by the five minute delay. If anything, it allowed me to relax and think about the run ahead while rising off the inch of sugar that coated my body. Apparently at 35-40mph a vacuum is created in my BTA water bottle and my entire body and bike was irrigated in Gatorade each descent. Thankfully it came off quickly with my water flush.

T2 was uneventful. After my break I ran into the change room, threw on my socks and shoes, had another snack of uncrustables, and was out the door.

Thankfully outside of the door were the portapotties. Because I had to pee like you could not believe. I tried my best to do so on the bike but just could not make it happen.

After a quick second break I hit the sunscreen helpers and was off. Only 26.2 miles to go!

Once again, I can’t complain with my performance on the bike leg. My bike performed flawlessly, the Di2 shifters did a great job with the thousands of shifts I made. I felt comfortable and fast. I even kept my average watts low despite the hill climbs. Though my NP was about where I wanted it to be. I even kept my cadence high.

Best of all, I didn’t die in the last split, and kept my pace pretty level. All in all, not too bad considering I had another 5 or so hours of work ahead of me. 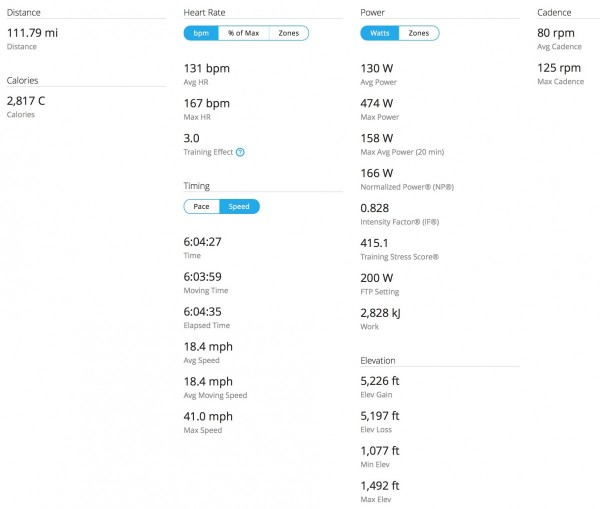