There’s a lot of hype surrounding an IRONMAN race. It’s a lot to live up to. And I think they did a pretty good job.

IRONMANs are a little different than most triathlons in that you are forced to make a weekend out of the event, rather than just grabbing a packet one day (or on race morning) and then showing up a few hours early to setup transition on race day.

I was a little surprised by the amount of waiting required for packet pickup on Friday. It seems like all of the 2600 or so participants decided to show up at the same time to pick up their race packets. In them you get a bag for everything. Morning clothes. Bike gear. Run Gear. Bike special needs. Run special needs. And of course the “free” IRONMAN backpack to hold it all.

It’s definitely an interesting way to run a race. It clearly makes sense for some to have the special needs, but I didn’t see the point in slowing down when I had momentum during the race. The frequent water/aid stations were more than enough, IMO. Similarly, I know some people like to change clothes for each discipline, but the simple trisuit is enough for me.

On Saturday we were required to rack our bikes. I do like this feature, as long as home base is not far from the tri, which was the case the weekend. Early racking just makes race day easier.

I pumped up my tires to a bit more than race pressure and entered transition to a very nice surprise. The volunteer waiting at my rack asked me if he could hand me my bike on race day! I was amazed. It felt like red carpet treatment. All I’d have to do is shout out my number as I ran through T1 and my bike would be waiting for me in the main aisle.

Perhaps the best of all, my spot was located under a bridge, making it amazingly easy to locate.

The IRONMAN Wisconsin athlete village was nice, though perhaps smaller than the one at the Chicago Triathlon I did a few weeks ago. I guess this makes sense as there were 3-4x more people in Chicago than Madison, making it a bigger commercial draw.

One nice highlight was NormaTec’s booth. They had 15 or so of their leg recovery systems hooked up and massaging athletes. Of course, I had to give them a try. They had the systems running in a 15-minute loop through each area of the lower torso. I do admit, I probably made it through two rotations before I gave up my spot. Those things feel great. If I had $1500 burning a hole in my pocket, I’d definitely pick one up. I have to imagine Sunday night/Monday morning would have been much more bearable with one.

I also gave Beacon Athlete Tracking a try. This little tracker the size of maybe two Bic lighters would send live updates to my family and friends throughout the bike and run portions of the race. With the Beacon, they wouldn’t have to wait for me to pass over a chip reader for updates on my position, they could just check their phones. My hope was that this little tracker rental would make my wife’s life easier on race day, helping her plan her spectator route.

Thankfully, Madison had a lot going on for my fam while I was doing all this. My “IRONWIFE” and kids were happily occupied by touring the capital and perusing the farmers market surrounding the capital building. Given that I couldn’t do this without them, it was nice to know they weren’t bored to death while I got all these requirements out of the way. 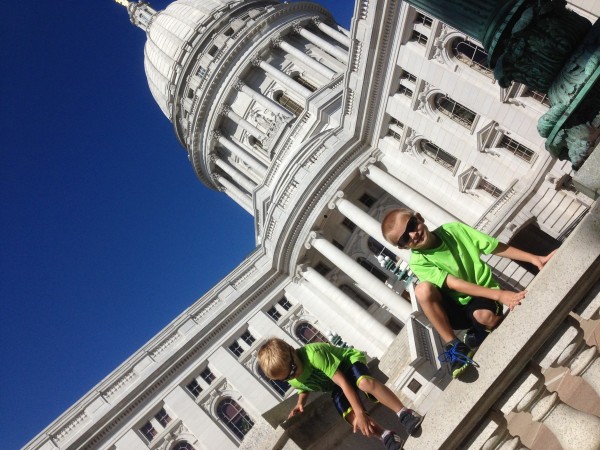