Ready it or not, the day finally came. I officially became an IRONMAN this past weekend when I completed IRONMAN Wisconsin.

Not surprisingly, I was quite anxious in the weeks leading up to the race. It didn’t help that it was in the 90s with high humidity a week out and it was forecast to rain on race day. Thankfully, mother nature gave us all a break and gave us 70° waters, and highs in the 70s. No rain was in sight and the wind was in the single digits.

It could not have been a more perfect day for a race.

I took my time on race morning, arriving about 15 minutes before transition opened. This is exactly how I like to operate, with plenty of time to take care of problems and no reason to stress out mentally before I stress out physically.

The water was opened at 6:30 and I made my way in about five minutes after that, thinking I must have been one of the last to enter. Based on every other mass start I’ve done, the hundred or so people before me would have constituted my entire wave. I didn’t realize it until a bit later that there was another 2,500 people behind me.

I swam out to the large buoy you see in the middle right of the pict above and relaxed. I used the buoyancy of my wetsuit to just lay in the water and take it all in. The light ripple and near glass-smoth surface combined with the rising sun was a sight to behold. I used these last few minutes to calm down and prepare myself as much as I could for the chaos that was about to come.

Right before the canon, I backed off the buoy a bit to try and find some clear water. It didn’t really help, as there was 2,600 other people vying for a good start.

And My Day Begins

For those who have never done a mass swim start like this, the only way to describe it would be to call it a human washing machine. Even with ~8′ of visibility, I was constantly getting bumped into and dodging wayward swimmers. With this in mind, I secured my Garmin watch with an extra rubber band, hoping that it would stay on, even after a direct hit. It did take that hit, and it did stay on. Just like in Chicago, that hit managed to pause the timer, but I was quick to notice and only “lost” 30 seconds of race time.

I felt quote good during the swim. I felt like I paced myself quite well. I had plenty of speed left for time when I was about to get crushed between two swimmers, allowing me to put the power down for a few seconds and slip in between them. I was pleasantly surprised at the speed the buoys flew by as I knocked them down one by one. I had expected this leg to feel like a lifetime, but it actually felt quicker than the 1:11:25 that I clocked.

The only complaint I have about the swim was the exit. The shoreline is quite rocky, and while I didn’t expect all the rocks to be removed, the bowling ball sized rock that I kicked on exit should have been moved. It’s not fun to start a 112 mile bike ride with a (possibly broken) bruised and bleeding toe. You’ll see me pass by on my way to T1 int he blue-armed ORCA suit at 1:11:24-:26 in the video below. 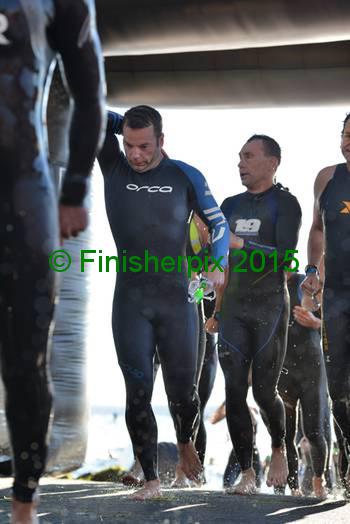 I love that IRONMAN races utilize volunteer strippers. It’s no fun trying to wrestle off a skin tight wetsuit after swimming for an hour plus. These generous volunteers are there to help yank that wetsuit off as quickly as possible so you can get on your way. Thanks so much for your help anonymous guy!

After stripping, I (and 2600 of my closest friends) ran up the spiral ramp to the T1 change room. As I said in my last post, I prefer to just race in a single trikit, so this was a pretty quick transition at 7:53 for me. I grabbed out a snack of two uncrustables, stuffed my wetsuit in my T1 bag, donned my helmet and was off.

Best of all, my wife, Jennifer, was waiting for me in transition. I couldn’t resist a quick kiss before I hopped on the bike.

I can’t really complain with my performance in the swim portion. I feel like I paced myself well. Sure, I could have gone faster, but I think it may have bit me later. T1 could definitely have been quicker, but my goal was to stay calm and pace myself.

I did take the final turn a bit wide, but other than that I wouldn’t change a thing (except for that rock kick).