This past weekend I competed in my second Chicago Triathlon Triple Challenge. 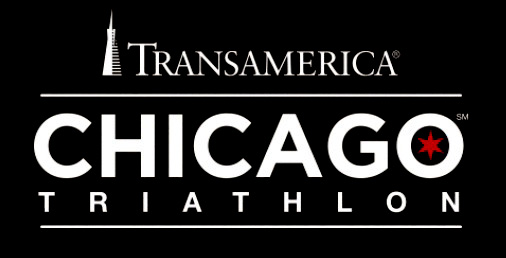 All told, I was going at race pace for just over 4.5 hours. Needless to say, I was a bit tired Sunday evening.

The first race of the morning on Sunday was thankfully the International Distance.

Us crazy triples were the first to go off, hopping in the (comparatively) balmy 65° water a couple minutes before 6:00 am. Once we all had our chance to “self-heat” our wetsuits (yes, I wore mine this time, in addition to a neoprene swim cap), we were off, starting out way south towards the Field Museum.

The water was nice and clear, allowing us to see other swimmer clearly, and even the bottom. (Thank you Chicago Yacht Club for weed whacking our swim course!) I must say, I’m still not used to this 1500m distance, it felt like the swim lasted forever. In reality, it only took me 28:10, ot 1:53/100m. Not exactly fast, but not horribly slow either. At this point I was in the “take it easy, you have another tri after this” mindset. Still, I was only 38th out of 256 in my age group and 398th out of 2,637 international participants. Can’t complain there.

Transition was uneventful, though it did take a few extra seconds to stuff my swim bag with everything necessary for the Sprint swim. 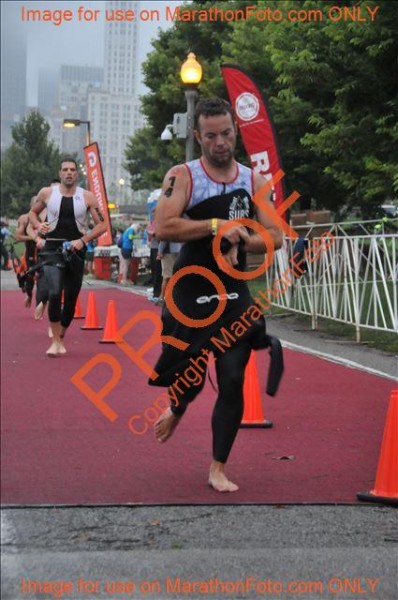 I had a lot of fun on the 40k bike course. There’s few better places to ride than Lake Shore Drive and the heart of Chicago. Great views and for the most part, great pavement. The only bad parts were on LSD near the river. It is really unique in that we get to ride on LSD, Intermediate (Lower?) Wacker and the super secret private busway that connect McCormick to the river.

The best part about it was “the guy in red” who traded positions with me the entire race. We passed each other every minute or two. Looking at my power meter, it was easily explained by my legs’ ability to output 225-250watts for a bit, followed by 175watts for a bit. I am not sure why they felt this way, as I was just pushing them at a constant 80-90%, but the meter and out swapping of positions doesn’t lie. Something to think about, for sure.

As is usually the case, the bike was my best showing of the race, with a 19th place age group and 148th place overall ranking. I averaged 22.35mph and 207watts NP.

Nothing much to say about transition besides that I was pretty quick here.

Given that I struggle with runs, I am very happy to say that I averaged an 8:12 pace over the 10k distance. I was feeling great the entire run, loudly encouraging ever fellow triple I saw. My Saucony Zealot ISO shoes felt amazing and did not bother my sockless feet. I think I’ve done too much training in my “firm” Saucony Kinvaras. It was time for something more plush. These Zealots will feel great at IM Wisconsin.

Unfortunately, “feeling great” on the run for me does not directly translate into great rankings. I scored 70/256 in my age group and 591/2,637 overall. 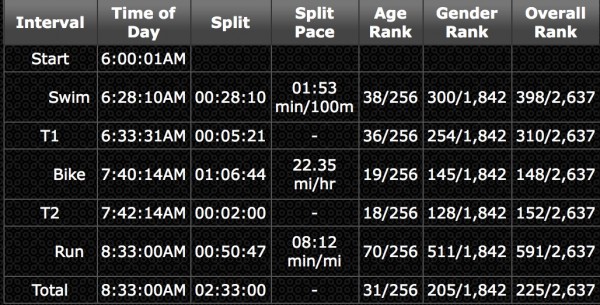 I placed a respectable 31st in my age group and 225th overall. While I would have liked to see another podium finish, you have to remember that over 2,500 of my competitors were only doing one race that day and did not do a race the day before. When you take that into account, 31st doesn’t sound so bad. In fact, only four age group and 19 overall triple challenge participants finished before me.

My time of 2:33 on the dot gave me just under two hours of rest before the start of the Sprint race.

Most of us triple trickled into the “VIP” start area with about 30 minutes to spare. We happily spoke of out last race and pumped ourselves up for the next. It was great to hang out with these fellow tri addicts, hear their stories and use some of their energy as my own.

It also didn’t hurt that the announcer let everyone watching know that we were the crazy ones. That one tri is not enough for us.

Into the water we went, only two minutes behind schedule. (Which is amazing since there was 52 waves before us and thousands of participants.

Unfortunately, of those thousands of participants, the ones that started swimming directly before us were the “first timers.” While being new to triathlon does not mean you’re a slow swimmer, there were quite a few. Because of this, a group of people who probably have never swum in open water, nor swum in such cold water were unceremoniously trampled by an unstoppable wave of hard core triathletes. We didn’t mean them any harm, but we definitely ran a few over, and swam under some others.

It was refreshing to be messy at T1, with no race following this one.

I definitely felt the earlier races in my quads, and that’s clear in the 1mph drop in pace and 21watt drop in power over the 24.5k Sprint race as compared to the 40k International race.

Amazingly enough, “red guy” was at my side again, playing tag back and forth as the ride went on. Even more surprisingly, he and I both experienced some significant aerobar slippage, making the ride 100x harder on us. It is not easy riding fast when your bars are angled 30° downwards. While I am still trying to see what the issue was, I have a feeing it was due to the rain and sudden temperature changes our bikes experienced that weekend. Low 60s and wet to mid 80s and dry does weird things to metal on metal friction levels.

It most definitely doesn’t help to have mechanical issues when you’re weaving in and out of slower traffic. I’m talking to you lady that decided to suddenly move 5′ to her right, without warning, nearly sending two of us into LSD traffic.

T2 was uneventful again, though much quicker as I didn’t have to be neat for my next race.

It was the same story for my run. Tired legs, respectable time.

The big difference this time around was all the traffic. The waves are setup so that the fastest groups go first and the slowest last. This is great for a smooth flow, except for us triples. Many locations of the race were on tight lake shore paths where it’s difficult to fit two people wide. I’m going to blame this for a good 30 seconds delay in finishing.

This time around I secured 21st in my age group and 119th overall. Again, take these numbers with a grain of salt as about 1,900 of my competition only did this sprint race, and did not spend 3 hours racing already that weekend. Again, only 19 of the 119 triple challenge participants finished before me, and only three of them were in my age group.

I ended up in 18th place out of the 119 Triple Challenge participants. I am happy to say that is is up from 31st the year before! Definitely feels good to see that all my hard work has paid off.

I’m doing this again! Take my money, sign me up!

I have nothing negative to say about this past weekend. This triple challenge is a blast. The races were well run. Chicago is beautiful and a great place to tri.

Can’t wait until next year.