This past weekend I competed in my second Chicago Triathlon Triple Challenge.

This “challenge” involves racing in three triathlons in one weekend. The first of the three was held on Saturday, at it was the SuperSprint.

This year I was more mentally prepared for this extremely short race. There’s no time to “ramp up” to speed with distances this short. You have to start fast and finish faster if you’re looking for a quick time.

I was not, however, mentally prepared for the weather. The rain never stopped the entire time I was out there, the only changes were how hard it was coming down. Due to the rain, everything was slowed before the race, requiring me to wait about 20 minutes to get my race packet and another 20 minutes to enter transition.

Unfortunately, all these delays had me literally running through transition setup. When I did find an open spot on the rack, I quickly found it was open because some lady (maybe Kramer’s wife?) thought it was ok to take up all the space she needed for her things. For some reason I offended her when I moved her stuff, preventing her from getting a penalty and allowing me to rack up.

As I said before, this is a fast race. With this in mind, I chose to skip the wetsuit. My thought was that 375m is so short, who needs one? I was a little worried when the announcer said it was 62° in the water, but I chose to go forward with only wearing my tri suit. 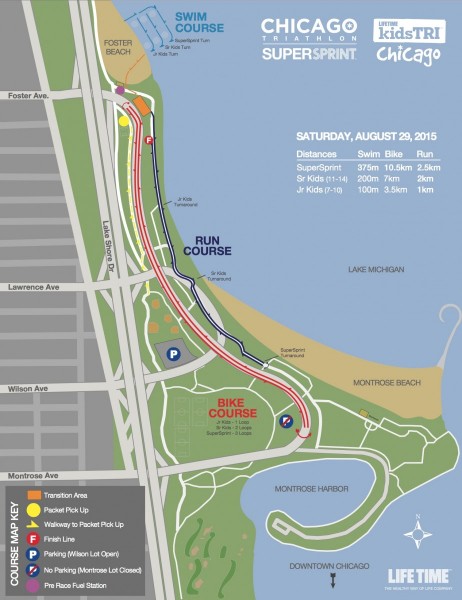 When I arrived at the beach start, of the 119 triple challenger participants, I think there was only four of us idiots that made that decision. I say idiots because the water was no where near 62°. It was in the mid 50s. And freezing cold. So cold that my body did not function properly, muscles did not respond to commands correctly. So cold that it went from shockingly cold, to painfully cold, to burning cold.

T1 went well, with nothing egregious to complain about. My lack of wetsuit allowed me to have the 7th fastest T1 out of 482 participants and 2nd in my age group (30-39).

The bike was acceptable, considering it was raining the entire time. I think I did a good job of going fast when safe and slowing enough for the six or so 180° turns to not slip and fall. Again, due to my relatively quick swim time/front of the pack position, the short, three-loop bike course did not get too bust until the last lap, allowing me to stay fast.

One little thing I am happy I did was leave the water in transition. I had no need for it on such a short course and it would have just been extra weight for me to accelerate out of each u-turn. I am happy with my 21mph average, as there was a lot of slowing, u-turning and accelerating back to speed. (40/482 overall, 6/66 age group).

T2 felt equally fast. It’s nice to do smaller races with only a few hundred bike to navigate through. I found my spot quickly and threw my junk shoes on in no time. Apparently other waves had a better time, as this was my (and my fellow triple challenge competitors’) worst performance of the day. (117/482, 8/66)

The run was interesting. I knew that my typical slow-to-start pacing was not going to work here. So I went out hard. After about a hundred yards a spectator told me I was the fifth person he’d seen, causing me to bump my pace up even harder as I started to smell a podium finish.

It was hard going, as most of the race was on a crushed limestone path saturated with water. Every puddle was a mystery. Was it superficial or deep? Do I risk keeping my stride and step in the puddle or jump it altogether? Unfortunately, I chose poorly a few times, landing in a puddle that was quite deep, which never feels good on the back.

Given that the run is traditionally where I lose the race, I was excited when only one guy passed me and I passed a single guy, allowing me to break even on my worst discipline. Knowing I was in “fifth” definitely helped here, pushing me to run 6:36 splits. This was good for 19th overall. Really. I was the 57th fastest runner. I have a hard time believing it as well. My run also scored the 12th fastest time in my age group. Maybe I am fast, but I just don’t have the drive to push the entire time… Sounds like a good goal for this off season.

Knowing I was the fifth to cross the finish line got my hope up really high. I must have checked the timing tent five times while I waited for the rest of the competitive waves to filter in. For the first half hour or so, I was excited as can be, I was holding onto third place in my division and 20th or so overall.

Unfortunately, as it always goes, someone who doesn’t swim well ate up my lead during the run and I slipped to fifth place… or so I thought.

I stuck around a little while, but thoughts of a warm car and a nap finally won over my desire to watch the award ceremony and I slipped into transition to retrieve my things. 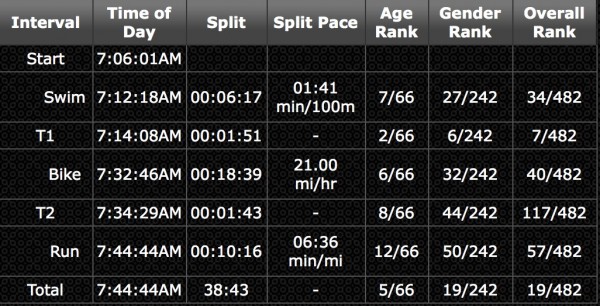 As I was walking past the awards ceremony I heard the weirdest thing. My name called over the PA.

I ran myself over to the stage and lo and behold, I got third place! I am not sure what the deal was with two people who “beat me,” but looking at their splits online, it seems they either cut laps or didn’t swim.

This isn’t my first podium finish,but it is my first one at a big-city race.

I got third! I podium’d!

I think the big takeaway for this race was that I actually may be able to run fast. I need to remember that when training this off season, work on my speed and work on sticking to that speed for 5 and 10k distances.