The Chicago Marathon was off to a great start. I had spent the morning hanging out with my brother, whom was also running, the weather was cool, but not cold, my body felt energetic and I was injury-free.

For the race I decided to wear some of my ultra sexy running shorts. As these were designed for runners, they had two small gel pockets, one on each hip. To help fuel me through my 26.2, I had stashed four Rocktanes in these pockets, hoping to take them every 30-45 minutes.

Almost immediately I noticed something was wrong. The bit of extra weight at my hips was gone. Not more than five miles in I had managed to lose all four gels. At the time I was just annoyed, but I didn’t think it’d come back to haunt me.

Through 13.1 I was doing great. I was on pace to PR by at least 30 minutes. I was feeling great and life was good. 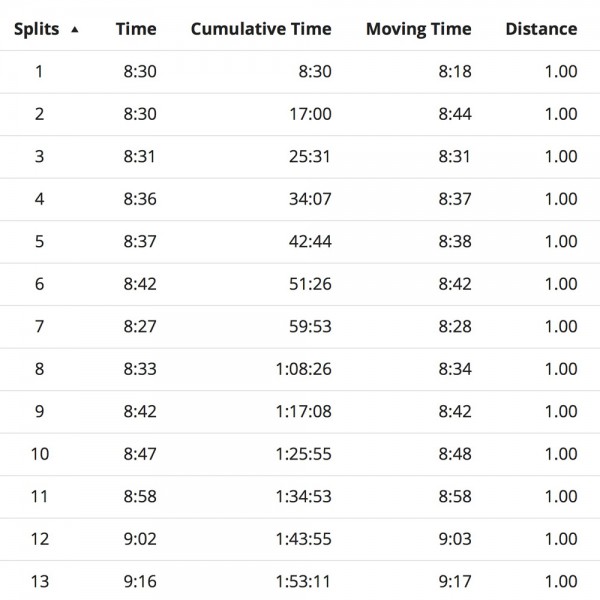 Unfortunately, a PR was not in the cards for me.

Looking back, it was just after 13.1 that I started to feel the effects of my poor planning. I tend to be a heavy, salty sweater. After exercise, if there’s enough wind/low humidity to evaporate the water, I am typically heavily coated in powdered sweat. In most cases, this is just an annoyance. 26.2, unfortunately, is not one of these cases. Nevertheless, I continued on, slipping on my pace but still convinced I’d manage some type of PR.

I fought myself for far too long. I knew I was in great shape. I had trained longer and harder for this marathon than my last. I had kept quicker paces through the hills of the Morton Arboretum for 20 miles than I had been logging during a race on the flats. None of this made any sense.

But something was wrong, and at mile 20 I broke my rule and slowed to a walk after a water break. Up to this point I had never walked in any race. It took a lot of internal fighting to “give up” and walk. I made a deal with myself, walked to a chosen landmark and started running again.

I made these deals with my disgusted self for the next four miles, until cramping in both of my calfs reached the point where I could no longer move. I took a seat on the curb, desperately trying to work the rocks out of my calfs, but nothing helped. I fought the pain for another two miles or so until some had noticed my frequent pit stops and notified a race official.

A few race medics suddenly appeared with a wheelchair. They scooped me up, wheeled me to a tent and proceeded to serve me glass after glass of water while a two medics beat the rocks out of my calfs.

How quickly my race had gone from a big PR, to a mild PR, to slow but confident of completion, to not even being sure I’d finish.

Eventually I did cross the finish line, almost two hours after I had planned on doing so.

So, what went wrong?

Looking back, I think this bonk can be attributed to poor race day preparation. I do not think it was due to inadequate training leading up to the event or even going out too fast.

I had trained with my Roctanes, and not having them took away nutrients and electrolytes that my body had expected. Additionally, I should have consumed more water throughout the race.

If you look at the chart above, you can see that my heart rate was steadily climbing through 13.1, while my pace was level, if not slipping a bit. I see this as evidence of dehydration. My heart was becoming less efficient as my blood thickened, eventually settling in at ~10bpm below max before I gave up and walked. I ran for about 2.5 hours with a my heart at about 175bpm. That’s just too much.

All of the culminated in my breakdown at mile 22ish.

Had I fueled myself properly, I have no doubt I would have PR’d. I may have slipped from my 3:45 goal, but I am confident in stating that I would have beat 4:18.

What did I learn from this?

Believe it or not, this bonk was a blessing in disguise. Had I gotten away with my poor race day preparation, it would most likely have caught me during my Ironman. Because of my near-failure here, I stand a better chance of succeeding at 140.6.

And in the end, I finished. And that’s the important part.