My brother’s been into running for much longer than I. Back in 2013 he suggested I do the half marathon while he did the full Twin Cities Marathon. Not to be outdone, I figured I’d shoot for the full distance and signed on up.

Given that my longest (and only) race to this point had been a 5k, I had a lot of work ahead of me. Looking back, I don’t think I prepared nearly enough, with only a few long runs and a max run of 20 miles and a max week of 60 miles run.

Based on the training I was doing a few weeks ago, before I went full idiot and broke my shoulder, the two months running up to the marathon look relaxing. Click the calendars if you’d like to see my totals.

Nevertheless, the race went well. I held a relatively constant pace, only dropping about one min per mile between my best and worst paces. I think the cold, drizzly weather helped me out, keeping my body cool and preventing the dehydration that got me in Chicago. 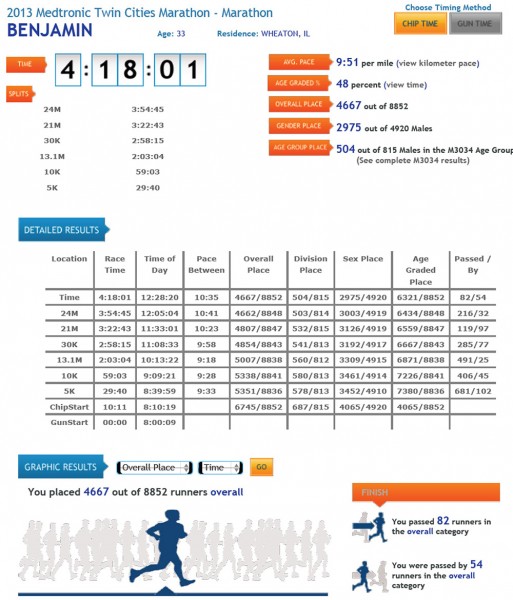 Based on my race report, I started out in 6,745th place and consistently passed runners, ending up in 4667th place out of 8,852 runners. Looks like I even negative-split the half marathon. Not too shabby for having been 70lbs heavier a few months beforehand and never having run a long race before. Believe it or not, I set out hoping for a 4:15 finish and I only missed my goal by three minutes.

As you can see, the beginning of the Twin Cities Marathon is relatively downhill, with a punishing uphill climb from miles 19 to 22 and an almost dangerous drop on tired legs to the finish line. I’m proud to say that although I slowed some during that climb, it was not to bad and nowhere near the drop most people saw. There’s nothing more motivating than starting to pass people when you feel like hell. It puts a bit of bounce back into your steps and pushes the IT band pain to the back of your mind.

FWIW, I ran the race with my iPhone streaming music to bluetooth headphones. Upon finish I had about 2% battery life left. If you’re not a fast runner or your phone’s battery is a bit older, I would not recommend the combo of GPS tracking and bluetooth streaming. I must say it was cool to text via Siri during the race, giving my cheering crew live updates about my location and condition. I am sure my fellow runners thought I was insane by talking to myself.

Perhaps best of all, I got this cool pict of my brother and me after the finish.