It’s nice to finally know what to expect at a triathlon. You know transition, the course is familiar (giving you a good way to judge the gas pedal), you recognize faces, if not names … it’s no longer the first day at a new school.

This year’s tri was a chilly one, but I had a new secret weapon – a wetsuit! Instead of being too cold to warm up in the water (my body takes a long time to open up and reach full potential), I was able to wade on in and get a few laps down before lining up for the staggered start. Plus, I just look good (or not, according to my wife).

It’s a Orca Equip Full Sleeve Triathlon Wetsuit, in case you were wondering. It’s a nice mix of thicker (5mm) neoprene for buoyancy and thin stuff in the arms (2mm) for flexibility.

Even though the swim is short at Batavia, I am glad I wore it for warmth. It will come in much more handy during y upcoming olympics and HIM/IMs.

The staggered start is nice in that things don’t get too crowded until the second of two laps. As I was 15th to start, my wife was able to grab an action shot. I’ve circled me in red, just in case you thought that Nessie has come to Illinois. 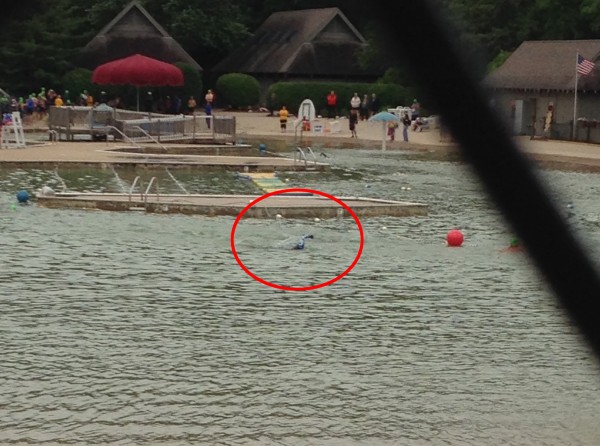 The swim went well, with me “passing” 9 of the 14 people ahead of me (as in, my split was significantly faster). Unfortunately, being that this was my first wetsuit tri, I probably lost 30 seconds in T1 trying to get it off. My speed is no big surprise, as I swam growing up and, in comparison, is probably my strongest discipline, despite me never training for it. I think I got in the pool once before this triathlon. Seriously.

The bike was uneventful, not fast, not slow. I definitely need to work on mounting and dismounting and even waiting until I get on the bike to put on my shoes. My biggest mistake was leaving it in too large of a gear for the slight uphill mounting section. There’s nothing more frustrating than having to stand on a pedal with all your might to even start to move forward.

The run was more of the same. Though this time around I didn’t have someone JUST faster than me to chase, which let me go a lot slower that I would have liked. A bit more endurance training would have been helpful here. I just felt out of energy, even though I was not.

I must say, the Batavia Triathlon by Experience Triathlon is one of the best run tris I’ve been at. Great (non-stale) food, hot pizza and free beer awaits finishers, while Joe hands out pretty cool prizes to a lucky few.